Down and feathers: What’s the difference?

Down and feathers are little miracles of nature that bring warmth to our lives. Down is highly elastic and, to some degree, can trap significantly more air than feathers with its three-dimensional structure.

This property is advantageous when it comes to heat insulation and is also called loft or fill power, which is expressed in cuin, an international standard measuring unit.

It goes without saying that we do not use down or feathers plucked from live animals in our products!

Where does down come from?

Down is the under layer of feathers on water birds, namely geese and ducks. Ground-dwelling birds such as turkeys and chickens do not have down. Down grows beneath the outer protective feathers and is mainly found in the breast area.

The quill of a full-grown goose feather is blunt and round. The feather is deeply curved with a compact shape. The vane end of the feather looks as if it has been cropped. It often has downy barbs at the bottom.

Duck feathers are deeply curved and delicate. They taper or take on a radial shape towards the tip.

Difference between down and feathers

Down and feathers differ mainly in terms of structure. Down is in a category of its own; it is not a kind of undeveloped or small feather and will never become a feather. Down does not have a quill but instead has only a dot-shaped core, which makes it much more elastic. Down is lighter than feathers. Since it is a three-dimensional form, it has more volume or fill power.

Which bird produces the best down?

How can such lightweight down insulate so well?

Down traps a large amount of air relative to its size due to its three-dimensional structure and its ability to repeatedly restore this structure. High-quality down has around two million fluffy barbs that interlock with each other. This allows them to form a layer of non-heat-conducting air that protects from the cold. Because they are elastic, they can be squeezed or compressed. When well fluffed up, they quickly regain their former shape.

Tips on how to care for and wash your bedding

…so that you can enjoy our products for years to come…

Before you wash or dry a pillow or duvet, make sure that the drum of your machine has a capacity of at least 10 kg. This is what you need to wash even a lightweight duvet.

Bedding must always be machine dried after washing. For best results, place one or two tennis balls in the drum. This will help fluff up the items. Select a low drying temperature. The secret is to dry for a longer time on low heat.

Bedding filled with down and feathers should be fluffed up every morning and aired at an open window. But never leave your pillows and duvets out in direct sunlight.

Important: Do not vacuum clean or beat your bedding!

Our recommendation: You can machine-wash your pillows, but it is best to have your duvets cleaned by professional dry cleaners.

Even if you wash your bedding, you should still replace it regularly.

What does the NOMITE mark stand for? 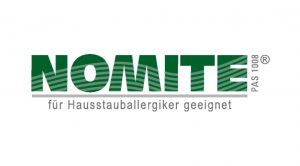 The NOMITE mark indicates that a product is suitable for people with house dust mite allergies. Because feather and down-filled bedding have excellent thermal and climatic conditions for humans – rapidly warming up during sleep and rapidly decreasing in humidity when the bedding is aired – they provide a very poor habitat for mites, which require humid conditions to survive.

The tight weave of feather and down cover fabrics also prevents mites from penetrating, so that people with allergies or asthma can also enjoy the natural comfort that down and feather bedding has to offer. This has been demonstrated by scientific research.

Here are a few tips for people who are allergic to house dust mites or at risk of an allergic reaction:

NOMITE is a registered trademark of the European Down & Feather Association (EDFA).

Sleep is a key factor in our mental and physical well-being. A good night’s sleep leaves you refreshed and full of energy in the morning. Poor sleep leaves you tired, weary, and often in a bad mood.

Good sleep does not just happen by itself. Quality bedding and proper sleep hygiene are both important for getting good sleep.

What is sleep hygiene?

Sleep hygiene refers to the conditions and behaviour that encourage healthy sleep. People with sleep disorders are therefore advised to follow the rules of sleep hygiene.